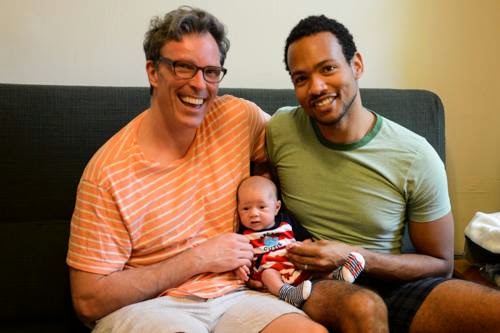 The Supreme Court handed down a decision regarding gay marriage and, in the course of the opinion, conveyed information relevant to child welfare. This essay will describe key aspects of the opinion and discuss these as they apply to adoptions by parents who have a same-gender partner or spouse. The “Cliff Notes” version of the majority opinion in the United States Supreme Court decision United States v Windsor 570 US ___ (2013)[1], might be described in this way: It is the province of the 50 states to make domestic relations decisions. However, where a state has determined that gay marriage is legal, the federal government can’t usurp the state’s role, declare a different definition and disenfranchise a segment of society – in this case, those in same-sex married relationships.

The Court did not have before it the question of whether states without gay marriage laws could refuse to recognize same-sex marriages performed under the laws of other states (p.2). The court did say that, for Ms. Windsor, who was lawfully married in the state of New York and who sought to inherit from her wife and to have the protection of laws that do not tax bequests from spouses, “her injury (failure to obtain a [tax] refund allegedly required by law) was concrete, persisting, and unrepressed.” The court went to great lengths to detail the significant impact of the law (DOMA) they deemed unconstitutional. The Court determined that, if they didn’t decide the question of the validity of the law, “the costs, uncertainties, and alleged harm and injuries likely would continue for a time measured in years before the issues is resolved.” (p. 11).

The Court reviewed the history of gay marriage in New York, Ms. Windsor’s state, noting that: “Slowly at first and then, in rapid course, the laws of New York came to acknowledge the urgency of this issue for same-sex couples who wanted to affirm their commitment to one another before their children, their family, their friends, and their community.” (p. 14).

Most notably for this essay, in the context of a conversation about child welfare, is a review of the Court’s awareness of the impact of DOMA (the Defense of Marriage Act) on children: The Supreme Court majority opinion states, “DOMA writes inequality into the entire United States Code…..DOMA’s principal effect is to identify a subset of state-sanctioned marriages and make them unequal. …(p. 22). …DOMA undermines both the public and private significance of state-sanctioned same-sex marriages; for it tells those couples, and all the world, that their otherwise valid marriages are unworthy of federal recognition. This places same-sex couples in an unstable position of being in a second-tier marriage….And it humiliates tens of thousands of children now being raised by same-sex couples. The law in question makes it even more difficult for the children to understand the integrity and closeness of their own family and its concord with other families in their community and in their daily lives.” (p 22-23).

The Court acknowledged the practical impact of DOMA on children as well: “DOMA also brings financial harm to children of same-sex couples. It raises the cost of health care for families by taxing health benefits provided by employers to their workers’ same-sex spouses….And it denies or reduces benefits allowed to families upon the loss of a spouse and parent, benefits that are an integral part of family security…” (p. 24).

Last but not least, the Court noted that, “DOMA instructs all federal officials, and indeed all persons with whom same-sex couples interact, including their own children, that their marriage is less worthy than the marriages of others.” p. 25.

Lifting these burdens from the lives of lesbian and gay families, the Court concludes, “The federal statute is invalid, for no legitimate purpose overcomes the purpose and effect to disparage and to injure those whom the state, by its marriage laws, sought to protect in personhood and dignity. By seeking to displace this protection and treating those persons as living in marriages less respected than others, the federal statute is in violation of the Fifth Amendment.” p. 26

With DOMA’s marriage definition provision struck down, the question is fairly asked, what might the implications of this opinion be for adoption by LGBT parents? While the Supreme Court does not compel the States to allow gay marriage in this opinion, they do not repeat the taunts of those who would demean same-sex couples. Instead, the Court signals, strongly, that the “times” have changed.

The language, above, powerfully states the awareness, on the part of the highest court of the land, that it is important for children to have their same-sex parents be respected by others in the community. It’s important for children with same-sex parents, literally, not to be humiliated by governmental disrespect and for them, “to understand the integrity and closeness of their own family and its concord with other families in their community and in their daily lives.” (p. 23). Where the universal standard of child welfare has been, ‘the best interests of the child,’ it would follow that judges should no longer deny same-sex adoption with reasoning that demeans same-sex parents. Instead, the Court says, these are families to be respected and, in effect, it is in the best interests of children to do so.

This awareness, stated in the Supreme Court decision, did not occur in a vacuum. Over many years, psychologists have conducted research exploring the quality of parenting in families with two moms and families with two dads. David Brodzinsky Ph.D. in his 2011 article, “Expanding Resources for Children III: Research-Based Best Practices in Adoption by Gays and Lesbians,” prepared a summary of research for the Donaldson Adoption Institute. Brodzinsky notes that research has, “challenged the stereotype of gays and lesbians as individuals who lack the ability, relationship stability and/or moral values to adequately raise children. Reviews of nearly a quarter-century of research on parenting by non-heterosexual adults is extraordinarily consistent in indicating that they are just as competent and well-adjusted as their heterosexual counterparts and that the children in their households show no meaningful differences in psychological adjustment from those who grow up with straight parents (Gartrell, Peyer, & Bos, 2011; Goldberg, 2010; Patterson, 2009; Patterson & Wainright, 2011; Stacey & Biblarz, 2001).”

Just as the Supreme Court, in Windsor (p. 14) noted a shift in a state’s desire to officially recognize same-sex unions, so, too, many states, through legislation and case law have made possible co-parent adoption by same-sex adopters. Even where not expressly allowed, some historically unsympathetic states have changed their practices to permit a workaround–- some states welcome home studies which honestly describe the same-sex couple’s marriage and life together and then allow placement with one of the parents, with a co-parent adoption finalization taking place back in their home state. This is still far from the practice of having a straightforward placement and finalization with a lawfully married lesbian or gay couple and it continues the pattern of putting the adopters in the position of incurring extra costs and expenditure of time simply because of their family form.[2]

In Massachusetts, and increasingly, in many other states as well, lesbian and gay singles and couples complete honest and transparent home studies and are placed with and finalized with their identity as a lesbian/gay single or couple clearly acknowledged and treated with respect. There are no extra steps, no extra costs and no messages that suggest that they’re so different, that there needs to be some alternate procedure.

Prospective adopters, regardless of their family form, who wish to work with an open-minded, non-discriminatory agency or law office may wish to ask direct questions of the agency or attorney. There is a list of adoption agencies which participate in the Human Rights Campaign review of their programs for cultural competence in serving LGBTIQ families. This list includes a number of faith-based agencies representing a variety of denominations, including those of the Christian faith. See: http://www.hrc.org/resources/entry/all-children-all-families-list-of-participating-agencies. There are many other adoption professionals, attorneys and agencies, not on this list, which also operate in an inclusive and non-discriminatory way.

Edith Windsor, in fighting for her right to inherit from her deceased wife, as her spouse, stood for a large number of LGBT couples who have lived lives of love and dedication without hope for respect or fair dealing with regard to societal benefits. In the days to come, the message of the Supreme Court decision –that there is a benefit for children of practices that show respect for their same-sex parents – are likely to be quoted in many contexts including support for adoption by same-sex prospective adoptive parents.