May the Circle Be Unbroken

“When everyone in the adoption system is cared for, all will ultimately benefit – especially the adopted child.” 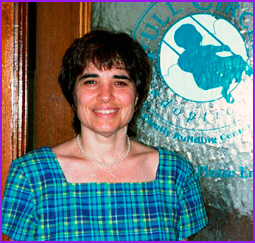 If Marla Ruth Allisan ’78 is sometimes reluctant to start her day at the gym, it’s not for lack of wanting to work out. It’s because she’d really rather be at the office. That’s right — Allisan is one of the lucky people who can’t wait to get to work in the morning. As director of Full Circle Adoptions in Northampton, Massachusetts, she knows “every day is different but has predictable elements,” and she knows — albeit humbly — that she will do her job well.

Allisan didn’t take the direct route to adoption work. As cofounder (with Robin Roberts ’79) of MHC’s Women’s Center and the college’s first women’s studies major (actually, she double-majored in psychology), she set out to be a litigator specializing in women’s rights. With a JD from Northeastern, she had a general practice with a Northampton firm for five years before deciding to add clinical skills. Helping people heal, Allisan surmised, would be considerably more inspiring than escalating conflicts.

So she opted to hit the books once again — this time at the Smith College School for Social Work. She supported herself by teaching law at UMass-Amherst, including the first interdisciplinary course in child abuse and neglect. Then, degree in hand, Allisan was hired by Jewish Family Services in Springfield — which, in addition to providing her with the required post-MSW training, was intrigued with her qualifications as an attorney. They involved her in their adoption program, and thus Allisan found the field that harmonized her lawyerly analytical skills and her desire to help people grow.

After two years at JFS, Allisan joined the psychiatry department at Bay State Medical Center, which included opportunities to teach as a member of the Tufts Medical School faculty. Parallel to this work, she began building an adoption program for Brightside Adoption Resource Center in West Springfield. Having honed both her clinical and adoption skills for four more years, Allisan decided to pair her very traditional training with her personal vision to create an agency of her own.

Full Circle Adoptions, founded in 1996, is a fully licensed, non-profit agency that specializes in domestic infant adoptions. Experienced adoption social workers statewide assist with home studies and birthparent counseling. But the agency’s networking capacity extends far beyond the Bay State — covering, in fact, the entire country. Full Circle’s birthparents are as likely to come from Montana, Alabama or Wyoming as they are from New England; adoptive parents sometimes come from as far away as Europe.

Like similar organizations, Full Circle is “ultra meticulous and careful about clinical and legal details,” Allisan says. But having spent the last decade working in adoption services, she is clear about what sets her agency apart from others. It has mainly to do with networking. “Full Circle is connected to professionals daily by e-mail, fax and use of our Website. This means that birthparents in particular — wherever they are calling from — are well-served.” The agency, she adds, is “proactive in letting birthparents, adoptive parents and adoption professionals know of its interest in providing relevant services, which may also include support for birthparents who choose to parent rather than make an adoption plan.”

ALLISAN FREELY ADMITS that “there is a very particular kind of personality that likes adoption work. You have to stay very even-keeled during highs and lows, and you have to [enjoy] a certain kind of dynamic timing. It’s very much like litigation — you have to do something now. And yet it’s all toward the goal of meeting everyone’s needs, not in the spirit of taking away from one person and giving to another. Usually, if the case is handled properly, birthparents feel a great deal of gratitude — as do adoptive parents … It’s very spiritual work, trying to help people build their families and making loving plans for children …”

In her experience with adoptive parents, Allisan says, “I’ve been incredibly impressed by their dignity in the face of uncertainty; their willingness to take chances, to open their hearts even in the context of high emotional risk; and their capacity to love, even when feeling quite emotionally exhausted.

“Likewise, for the birthparents, nothing can quite convey the anguish of letting go of a child just recently born. Their willingness to make decisions based on the child’s best interests; their ability to open their hearts to a prospective adoptive family they’ve known for sometimes only a short time period; and their ability to rise above some of the cultural messages that would have them feel ashamed; — these qualities have moved Allisan on many occasions.

Because Full Circle works so systematically and so thoroughly, the adoption process progresses very quickly. “In our first year,” Allisan point out, “we did fifteen placements, and nobody waited longer than six months for a designation. In the short run, that’s certainly good PR.” But numbers, she acknowledges, are a superficial measure of success.

Putting things in perspective, Allisan says she’ll know if her agency’s work was successful when the adopted children tell her, “My parents were able to talk openly and comfortably about adoption; I grew up feeling very proud and solid in my identity; and when I had questions, or when I desired to know my birth family, they helped me.” Similarly, Allisan will know “the full family system was honored” when birthparents say that the agency helped them “feel good about their decision, work through their grief as it arose, and genuinely integrate the experience and move forward in their lives.” She will know of her success when things have, as it were, come full circle.

The Way It Works

In Marla Allisan’s experience, families seek to adopt primarily for reasons of infertility. With birth families, she says, their choice is usually based on “a healthy respect for the responsibilities of parenting and a deep devotion to having something for the child that the parents feel they can’t give. It may be borne of resources — money or time, or a combination of both.”

“We’re also linked nationally to a number of professionals who work with birthparents,” Allisan notes. “They know that the minute they refer a birthmother to us, we’ll take over from there to make sure her financial, housing, clinical, legal and social needs are properly addressed. So, a birthmother in Montana can call us, and [shortly thereafter] we’ll have an adoption professional available to meet with her face-to-face — to begin establishing a rapport.”

Once their own needs are determined, birth parents are assisted with neutral options counseling. Full Circle believes strongly in helping birthparents explore all their options for parenting. If they choose to make an adoption plan, they then discuss the qualities they seek in adoptive parents — e.g., number of children already in the family, religious affiliation, child-care plan, etc. (Age, Allisan points out, does not matter so much as vitality and enthusiasm.) Selected profiles are considered, and when narrowed down to one, the birthmother (or parents) calls the adoptive parents — a somewhat nerve-wracking experience all around. It’s actually rare that the birthmother and adoptive parents don’t “click.” After the initial phone conversation, a meeting — if desired by all — is arranged.

“Domestic adoption,” Allisan asserts, “is not as difficult as the media often portrays it to be.” With her agency, the usual range of time between completion of an adoptive family’s profile and a designation is six to eighteen months; most are achieved within the six months.

Full Circle adoptions, Allisan says, are largely “semi-open, where the parents exchange first names and then meet. But I’ve had several requests for fully-open adoptions, where people know each other’s last names and addresses, and have post-placement in-person communication.” Allisan, who favors the term “cooperative adoption” over the labels “open” or “closed,” says a wide spectrum of options exists “for communication and maintaining a sense of privacy/integrity of the family.”

Allisan in quick to point out the “East Coast/West Coast cultural difference.” West Coast parents, she notes, seem quite comfortable with more “open” adoption — where there is greater communication or even post-placement contact. By contrast, “on the East Coast, we’re much more reserved; some families tend not to like sharing last names or meeting post-placement.”

Also, “entrustment ceremonies” are much more common on the West Coast — though Allisan has helped her clients create them in the East as well. A way of “marking the moment” of adoption, the ceremony is a process whereby the child is not “given up,” but rather entrusted and blessed. “I think it’s really wonderful,” Allisan asserts, “because a child does not have to feel as though one set of parents had to not love him in order for another set to love him.”